Things I Almost Got You Just For Being My Dad 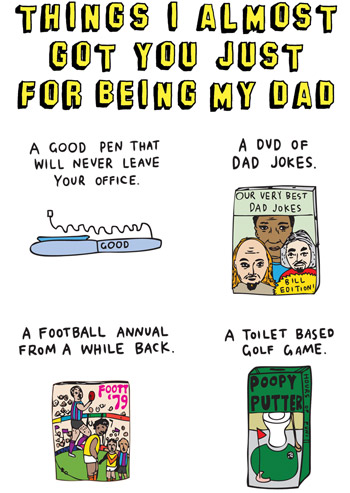 Things about this card:

1. The Poopy Putter is a REAL THING. We have one in our office, my brother got it for a gag Christmas present and left without taking it, so I took it to give back to him.

2. My Dad used to get real agro if anyone took his GOOD PEN FROM THE OFFICE. He didn't like anyone taking them. We, as a family took them often.

3. There are a lot of comedians called Bill. I could have also gone for Bill Hicks, Bill Maher or Billy Crystal.

4. My father would not want the 1979 football annual because the VFL Grand Final was between Collingwood and Carlton and Carlton won by 5 points. According to wikipedia, the film director Kevin Smith was one of the umpires

5. This card is available on Etsy.