The other week I realised we had almost been in our new studio for a long as we were in the old one at the East Brunswick Club. That seems like an eternity ago and I have forgotten the 4 flights of stairs like woman forgets childbirth (or so I'm told).

Our studio isn't one that you will see on Pinterest, it is a total hodgepodge with a maze like layout. Slowly but surely we are putting our stamp on it and one day I think it will be a space we are both happy with, but probably still not worthy of pinning. The space was an old school so there are no white painted floorboards, just cheap hard working lino from the late '60s. 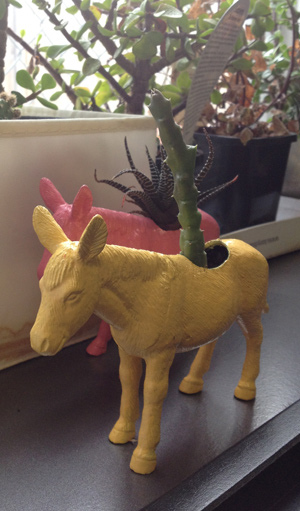 I have a pink ass and a yellow ass. From Call Me Ishmael, these little guys add a little bit of class to a wobbly Ikea Billy that holds a selection of things purchased for market displays that we don't use much but can't throw out. The yellow donkey looks like he has something from The Thing coming out of him. 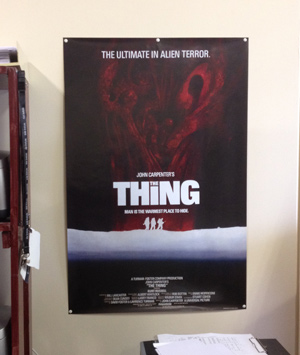 Speaking of The Thing, Gareth loves this movie. He even got the book based on the film. It isn't often you hear that sentence. If you're a big fan of the film you might also like this card Gareth came up with. It seems only a small select few get it but that's okay because these customers make us very happy. 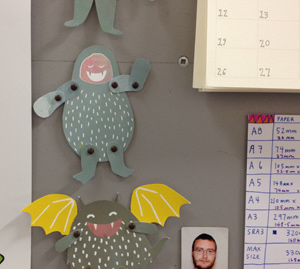 I recently made a second sign for paper sizes to stick up in my office. Like staplers, you can never have too many. This one on the bottom left includes inches and half sizes for each paper size. Coupled with the transform tool in Illustrator, nothing should ever be out of place again. 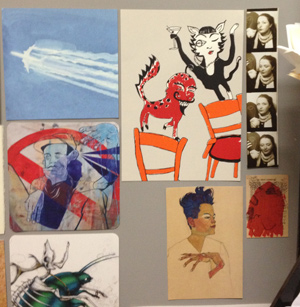 Gareth has a bunch of art he has been collecting that sits behind his computer. He often buys art at markets and also online and I know Emma Kidd from Benconservato is one of his favourites. 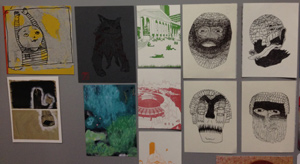 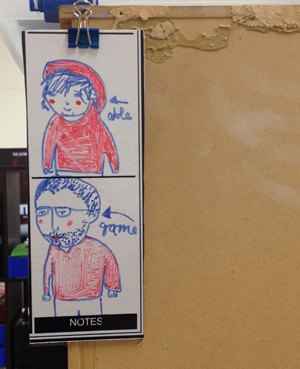 Gareth cut this out of an old wall planner as he wanted to keep the drawing. It is from back when we had the home studio in McKinnon and used to sit on the mantle. Gareth also has a charming photo of me sitting just in front of the mantle with the same red hoodie, folding cards in what I am assuming is winter because I look like a hunchback as there is a scarf on under the hoodie. 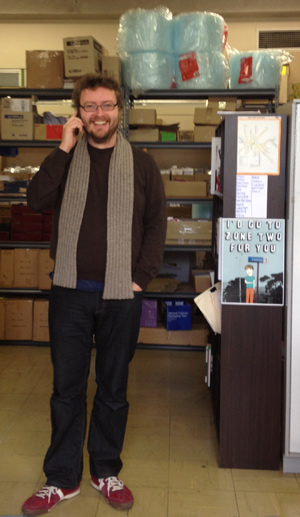 Here is Gareth on the phone wheeling and dealing with someone, trying to get the best price on bubblewrap.